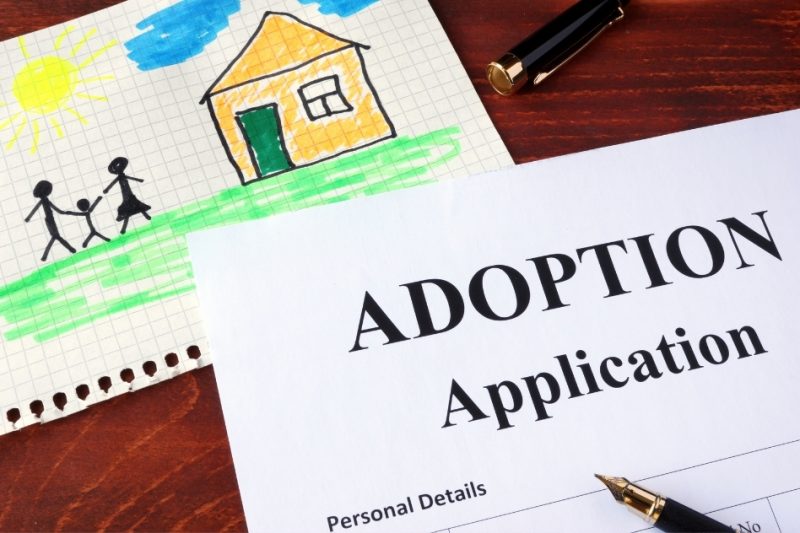 As I’m at almost end of this pregnancy there’s a story I’ll share with you. Getting pregnant wasn’t actually a plan – in fact, if it wasn’t for the pandemic it wouldn’t have happened.

After my ectopic pregnancy back in March and other issues that led to IUI, I was done. We decided we would like to adopt instead. It wasn’t a spontaneous decision though and not a secret for sure – I said on my Instagram that we were pretty busy with something this spring and that’s basically what it was.

Even before Dylan was born we talked about adoption. I grew up with adopted kids around, Matt has cousins that are adopted, so it wasn’t something foreign to us. I didn’t feel the need to have only the kids I biologically produced, especially considering how many kids out there need help.

I often see many people posting things like “just adopt a baby” or “I’ll just adopt a kid in the future”, like it was as simple as shopping for a new item, but the reality is far from it. Especially if you live out of your home country or different states for a while, then seriously – it’s super complicated.

The thing is… when we moved to Italy adoption became out of the question, because we couldn’t do it in Italy. In Poland (where I’m from) adoption is free minus legal fees, but we weren’t eligible because we didn’t have the statutory 5-year marriage and there’s an age limit of 40.

On top of the fact that we’d need to wait for training for a while, and then procedures take about 2 years or longer. Not to mention that Matt obviously doesn’t speak Polish, so that’s another issue with completing necessary in-person courses.

We knew that until and if we moved back to the US, that wasn’t going to happen and this is pretty much why we were trying for another biological baby. We did eventually move back, bought a house (it’s not a requirement, but we wanted to have some stability) and started all the endless procedures.

The fact we started the process right when the pandemic started didn’t help, as the first step for everything was getting a criminal background check. Unless you lived in the same state and never elsewhere you need to get a fingerprint card as well.

Normally, that wouldn’t have been a problem – you just walk into the office, but they don’t do appointments because of the pandemic so whoever needed them had to find other options, or wait it out (if someone decided to wait it out – good luck, because the office is still not doing them and it’s 2021 already).

We found a private dude who was licensed to do fingerprint cards in his kitchen, so it was a bit of an experience itself. Once we had the card, we knew we were ready to submit them to either an agency or foster care.

For those unaware, in the US they’re basically a few different options:

We considered all three option (minutes the relative since we knew no children eligible), but here’s what happened and why none worked for us after all…

First, we thought of foster care since it’s free and much quicker than any other option. One thing to consider was the age of the child. We had no preference in terms of gender, race, potential disability, but we didn’t want more than one more kid and not older than Dylan (since what do we know about raising older kids, and to add to that – most kids also couldn’t have been placed in homes with younger kids anyway for psychological reasons).

We were fine with the foster-to-adopt option, but at least in Utah everyone was pretty open with us that it doesn’t happen very often because they always find some relative somewhere and try to match the baby with them after some time in foster care.

It could have taken a few kids until they’d match us with one that was on the foster-to-adopt path, which also wasn’t the biggest issue for me (it would although be sad to part ways with the kid you take care of for a while), but then other issues appeared.

Many children had a sibling, aunt, cousin, someone living nearby so they couldn’t be moved. We’d be stuck in Utah forever and we cannot make this choice right now – we lived in so many places it’s hard to be sure that this is where we’ll stay FOREVER.

That, on top of the fact that most children were part of a sibling group so they wanted them to go to one house together. It was a lot of requirements, but we were still in to look for a “perfect match” until we stumbled upon another issue: we’d really have to swap jobs to make it work.

Because of what we do, we travel for work and for fun. Many trips are last-minute, because they’re weather dependent or if they’re projects they often tell you a few days in advance (I had an international trip I confirmed a few hours before the flight once).

If we can and are both going we take Dylan with us. If the trip was around the US foster kids need permission from a judge to travel, which is usually granted unless they have a meeting with a social worker or relatives, but that cannot be done last minute. But, more importantly, foster kids cannot travel internationally at all!

We were told if we needed to travel out of the country we could drop the kid off at another foster house temporarily, but that didn’t sound right to us. We wouldn’t feel right doing to the kid especially considering the frequency of these trips. So basically, foster to adopt option was out of the window.

International adoption was something we considered, but things have changed significantly than they were even a decade ago. I know for many people it seems like it must be easy after Angelina Jolie stories – just fly to Cambodia or somewhere and pick up a baby, right? It’s far from reality.

It requires a specific agency that charges a huge fee, long legal procedures that are also costly, then other legal procedures for a child to even enter the US, get residency and green card.

These days US has blocked international adoptions from most countries due to child trafficking and frauds. Once China started allowing more than one kid, Chinese adoptions work on a different basis and most Chinese kids eligible for international adoption are those that require pricy medical treatments in the US whose parents cannot afford in-country. Unfortunately, we cannot afford them either.

Some countries like Bolivia have a very long wait-time and legal procedures make it pretty much impossible these days. Ethiopia, South Korea, Russia and Guatemala banned US adoptions entirely.

Adoption from Mexico is possible and you really need to go there for 6 weeks, but there’s an age limit of min. 5 (or 3, don’t remember exactly) – to make sure that no one wants to adopt the child in Mexico. Only then the child is eligible internationally.

Not surprisingly, we stuck with a more local option and our option was a newborn agency in Utah (since you need to do it in a state where you live).

There’s a number of agencies in Utah, but each has slightly different rules, fees, the volume of people they work with, and works in a different way. The general rule is to register with various agencies because you never know which one will match you.

Regardless of the agency, you need a home study first (same for foster care) which you can do directly with the agency. Once you have it you can also register with another agency, but only once the home study is completed you can enter a waitlist.

Once this paperwork is all processed you’ll also need to prepare your house for a social worker visit and interview. They’ll check if you have all your home baby-proofed (including things you need to have a lock on your medicine cabinet behind closed doors, etc.), inspect where would the new kid live and so on.

Once this is completed, you sign an agreement with an agency and create another presentation about your family – sort of an ad for birth parents to pick you over another family. Once they do pick you, the agency arranges a meeting between you too where you can meet, discuss the level of relationships you both want to maintain, etc. Then the decision is made, BUT the birth mom has 24h after birth to change her mind as well.

Speaking of an agreement with an agency, one thing you need to sign is a contract to pay all agency fees. Let me tell you – it’s a LOT of money. Most agencies have fees of $20,000+ and that’s considered cheap actually…

The birth mom doesn’t get paid, but you naturally need to cover her medical expenses if she lacks insurance. There are also legal fees involved. It comes down to about $40-50,000 dollars in total.

Many agencies are also sneaky and ask you to pay a few thousand to even get on the waiting list. If you don’t get matched with anyone you don’t get the fees refunded and if a birth mom backs out you only get half of the money back, which is absolutely terrible, because not everyone can afford multiple fees without actually adopting.

Back to the point, weeks passed and with the uncertainty of our businesses with covid and myself getting frustrated, we weren’t sure whether we can actually afford to adopt anymore.

We calculated that even if we had to do IVF a few times and if we did it in the Czech Republic (since it’s very cheap and better compared to the US) we’d still not even spend half of the amount the adoption would cost us.

There are some ways to help with fees and to be honest, this is why I started my own toy store – to gain customer service experience and I was close to actually applying for a job at eBay since they offer amazing adoption and fertility benefits.

It was sad that it all came to our financial ability over the actual ability and will, but that’s the reality. Adoption is pricy, lengthy and difficult (leaving the mental responsibility aside).

We got incredibly lucky that the fertility treatment worked, but I seriously wish the system worked differently because I know there are many kids out there waiting to be adopted. 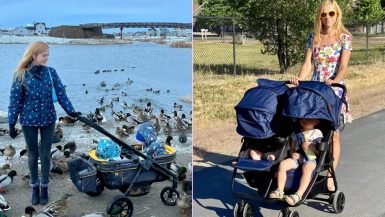 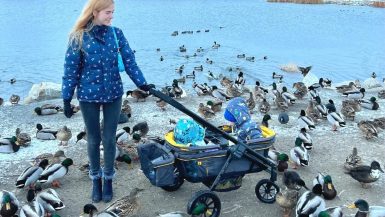 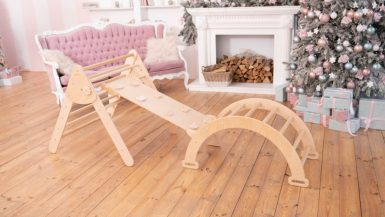 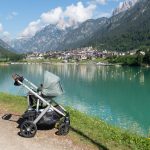 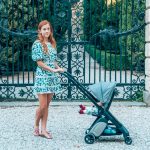 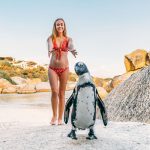 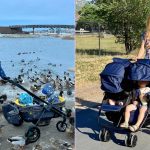 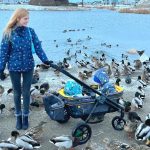 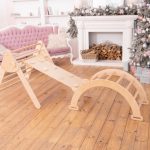 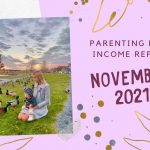 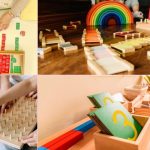